Rotorua: New Kiwi Friends & A Hotbed of Activity in the North Island

Okere Falls, Rotorua , one of the best rafting places in NZ, boasts the world’s highest commercially rafted waterfall at almost 23 feet and is a short hike from Mal and Jen’s home!

One of the reasons I decided to travel alone was that I wanted to meet people and explore the culture. If I was traveling with one or two other friends, I don’t think I would have had the invitation to come and spend a few days with Kiwi natives, Malcolm and Jenny, who I met during my visit with Val in Whakatane.

Mal and Jenny are world travelers who rent their home or do house exchanges which enable them to experience a new place for months at a time. They are both a wealth of information and tell insightful travel stories not only about their native country, but also about  Europe, Australia, Canada, and the United States. On a visit to D.C. they were hijacked by a taxi driver who threatened to drop them off in a bad part of town unless they paid ten times the fare, and because of a bad experience at L.A.X. airport with an incredibly rude customs agent who treated these intelligent people like morons, they now fly into Vancouver, British Columbia, when entering the U.S. or Canada (this doesn’t speak well, does it). And yes, when I reveal I’m an American, I get asked about “The Donald.” It’s embarrassing. 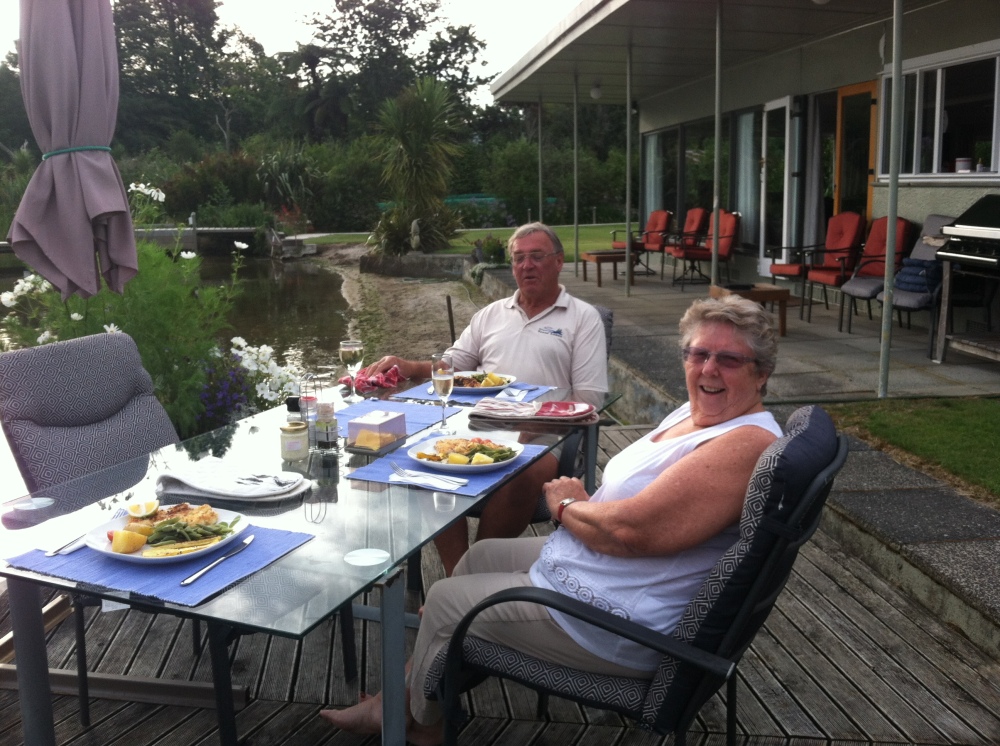 Enjoying another great meal prepared by Jenny. I do the clean-up!

Malcolm’s expertise is in transportation, overseeing and maintaining the painting of those yellow and white stripe, highway markings (Kiwis have emotionally intelligent road signs like: Other people make mistakes. Slow down  &  Eyes on the road. Focus on the drive), while Jenny is a retired elementary teacher/principal, who really knows how to get kids to problem solve on their own with fun, hands-on lessons. Judging by her beautiful flower, fruit, and vegetable gardens, she nurtures nature as well as young minds.

Together, they spent a year in Ontario, Canada, while Jenny was on a teacher exchange and got to experience a full season of winter.  A really good question they often ask people when abroad is, ” What makes you a Canadian/Italian/Croatian”? By the way, asking, and just plain creating questions is really important. According to the book The 5 Elements of Effective Thinking, authors Edward Burger and Michael Starbird state:

Constantly formulating and raising questions is a mind-opening habit that forces you to have a deeper engagement with the world and a different inner experience.  Asking yourself challenging questions can help you reveal hidden assumptions, avoid bias, expose vagueness, identify errors, and consider alternatives. Generating questions can help direct your next steps toward deeper understanding and creative problem solving. (74)

When they put that question (What makes you a Canadian?) to Canadians, nine times out of ten, their first response was, “Well, we’re not American.” Canadians are proud of their heritage and don’t like being seen as just a northern appendage of the US.  Mal and Jenny put that challenging question –What makes you an American ?– to me, and I have to tell you, I really had to think about it and came up with:  We have a real can do attitude, we’re creative entrepreneurs and have a great system of democracy, but we’re also a little self absorbed with blinders on and don’t know a whole lot about other cultures or the rest of the world. If a foreigner were to ask you that question, how would you respond?  I’d like to know!  I’ve been asking myself a lot of questions lately, but I digress….

Rotorua, famous for its sparkling lakes, mountain biking terrain, and geothermal attractions, is just a twenty minute drive from Jen and Mal’s home in Okere Falls. Right in the city center is a park on the shore of Lake Rotorua, dotted with geothermal hot spots and bubbling mud holes. Driving into town on most days, you can really notice the “unique” eggy smell, which is associated with hydrogen sulphide (H2S).

City park in Rotorua featuring one of geothermal spots.

A recommended, guided tour I took was to Wai-O-Tapu (Sacred Waters) dubbed the “thermal wonderland.” It’s about a twenty minute ride from Rotorua city center and well worth it. To view all twenty-five sights takes about an hour and a half and includes such attractions as various craters, mud pools, explosive geysers, and thermal pools of startling colors including Champagne Pool, and Devil’s bath ( the color is the result of excess water from the Champagne Pool mixing with sulphur and ferrous salts. Cloud cover and reflected light affect the color also).

Jenny and Mal generously let me borrow one of their cars during my stay, so on their recommendations, I had a chance to explore two other landmarks.  Lake Tikitapu is known as Blue Lake by the locals because of its striking blue color. Legend has it that in ancient times, the daughter of a chief lost her tiki, a sacred greenstone neck ornament while swimming, and it still remains hidden beneath the blue waters of the lake.  While there, I walked the track around the perimeter of lake and watched families swimming, water-skiing, and enjoying the last days of their summer vacation. It really is this color!

On the walking track, an hour’s walk, with Blue Lake peeking through.

Another great place to visit for free and only five minutes from town is Whakarewarewa Forest or “The Redwoods.” Originally established as a test site to grow different native and exotic forest species, it is now known for its array of walking, running, biking, and horse trails that start off in the imposing Redwood Grove. I opted for a two hour walk on one of the many trails and met with all of the above sport’s enthusiasts, many accompanied by man’s best friend.

A view of The Redwood Grove on a walking hike.

There is just so much to do here, I barely scratched the surface. I didn’t get to the Hobbiton movie set which was a little expensive and generally poo-pooed by the locals I met who considered it too touristy.  I still would have liked to see it though. I also would add to the next to-do list the myriad of spa and wellness options available like mud baths and alkaline sulphur soaks. Who wants to come back with me?!

I’ve mentioned this before, but I’ll say it again. The visitor iSite centers located in almost every town are just amazing and staffed with friendly and knowledgeable folks who can take care of your every need.  Most buses stop right at the sites or close by, and it’s a comfort knowing there is someone to help whether it’s for directions or a much needed bathroom break. The buses here in NZ are plentiful and dependable. I really like the Intercity Bus service (air conditioned, free Wifi, run on time) which links all the major towns and cities, but you have to book ahead as it’s a popular mode of transportation.

I hated to leave my new Kiwi friends–and Jenny’s excellent cooking! She introduced me to a new fruit called feijoa (fee jo a) originally from South America which she made as a feijoa crisp. Hard to describe. Maybe a fragrant taste? Delicious. And the ice cream……

On my own again and off to Hawke’s Bay and the Art Deco capital, Napier!