On the waterfront promenade along the Marine Parade.

It’s amazing how attached you can become to a place after spending a few days and regret leaving when it is time to move on. But then I arrived in Napier. Is it possible  you can fall in love with one town or city only to find that the next is even better?

Napier is a city seaport of about 58,0000 people located in what’s called Hawke’s Bay, a large, semi-circular bay that dominates the east coast of New Zealand’s North Island.  In 1931, it suffered a devastating earthquake that took 265 lives and destroyed the vast majority of buildings in the commercial district. (Nine thousand eight hundred acres of now Napier were undersea before the earth quake raised it above sea level!)  Rebuilding began almost immediately and reflected the popular architectural style of the times, Art Deco.  As a result, Napier has the most comprehensive collection of inner city Art Deco buildings in the world.

Getting off the bus and trying to locate accommodations in any new place can be somewhat daunting, especially shouldering a heavy backpack, toting a handbag, and wheeling a suitcase. I knew the hostel in town was close by, so without a map I spied a young cab driver sitting in his car and asked directions.  Maybe it was information overload–all this “newness” again– but my mind just couldn’t make the call; I was dialing up a busy signal. What I wanted was someone to simply take control and deposit me there!  Five bucks later, I got a few sight seeing tips and was plunked right at the front door of the Criterion Backpackers.

Formerly a hotel built in the Art Deco style with a second floor balcony running across the front, I found a “weathered” albeit  welcoming place. I was taken to my single room with a double bed and sink located right across the hall from the shared bathrooms, then shown the living room with pool table, kitchen facilities, and, best of all, a large dining room where in off hours, I could practice being extroverted or just work comfortably alone. Oh… this place also offered a breakfast of all the toast you can eat with butter, jam, peanut butter,  dry and hot cereal, and tea and coffee (instant, but who cares). Best of all, it was a minute’s walk up the street to the i Site Visitor’s Center and the tree-lined waterfront promenade on the Marine Parade.

Criterion Backpackers on the guided walking tour of the Art Deco inner city.

The dining room at the Criterion Backpackers

Napier feels very much like a resort with palm trees that line the city, and the Marine Parade, with its various parks, gardens, and memorials, that runs along the shore of the city.  This makes it perfect for long walks, people-watching, and one of my favorite things to do– lounge, ponder, and drink coffee– at one of the many cafes. My pick for best cafe is the Cafe Divine whose motto is: Coffee is our lover.”

The Cafe Divine is divine.

When you pay and place an order at any of the cafes in New Zealand, you are given a number which you place on a small, metal stand and take to your seat, so your order can be delivered. There is no tipping here (including cab drivers and house keeping staff). People make a decent minimum wage.

Every city has its criticisms, whether it be a sculpture considered “art” or some other expenditure of taxpayer dollars that residents find questionable. Napier has its “viewing platform.”  Completed recently to the tune of 1.4 million to cover an unsightly storm water pipe on the shoreline, it looks like a pier, but it isn’t one and will always sit on dry land except when there’s a storm.  To extend it further out in the ocean and allow fishing and boating opportunities would cost the city significantly. The local news did a humorous piece on this the other day emphasizing the play on words Napier–Na  pier (no pier) and funny quips from interviews with different residents. Kiwis have a great sense of humor and can laugh at themselves.  People either love the platform or hate it. I rather liked it.

Since Napier is all about Art Deco style ( stream-lined and geometric shapes), the first thing I did was to take a two and a half hour guided tour around the city to view the architecture discovering that many examples incorporated Maori motifs. The tours cost $20. (NZ), and guides appeared to be retirees with a passion for history and their city.  Maybe we should offer tours like these in Hallowell during the summer months?!  If you happen to be here in mid February, there is the Art Deco  Weekend, a whole week of celebrations and events where everyone dresses up in 1930s styles.

Napier and the whole Hawke’s Bay area is wine country with dozens and dozens of wineries including the oldest, The Mission Estate–recommended by that earlier cab driver. Wine tours are very popular and would have been interesting to visit, but since I don’t drink, I didn’t see the point when I couldn’t participate in all that tasting (my apologies to all my southern Maine wine-tasting-group-friends who would have loved a NZ Sav Blanc!).

One thing I was intrigued to see was Cape Kidnappers.  An agent at the i Site Center highly recommended an overland, guided tour run by Gannet Safaris, that included seeing not only the 5000 acre Cape Kidnappers Station, but also the largest mainland nesting place of gannets (20,000) in the world. Gannets are members of the Booby family(!) with distinctive black eye markings and a pale gold crown and live to be on average 25 to 40 years old!

With a name like Cape Kidnappers, there has to be a story… In 1767 a young Tahitian servant on board Captain Cook’s ship Endeavor, which was landed at the headland, was kidnapped while swimming and taken on board a  Maori fishing canoe. Shots were fired and several Maori were killed and the boy was rescued, hence the name.

I was picked up at the i Site Center and met Jo, a get-right-to-business, wiry, handsome woman, who would serve as our tour guide.  Along with four other couples and another single woman from New Zealand, we boarded the small coach with me riding shot gun getting the best view.  (One guy worked somewhere in northern Canada, and for every three years of work he puts in, he gets one year off with pay. His wife told me she agreed to marry him with the stipulation that he takes her somewhere warm each winter.  Must be cold…and isolated!)

It was a half hour’s drive to the base at TeAwanga, and since this is private property, we had to be buzzed in at the gate. Cape Kidnappers Station is a “farm” of over 5000 acres with ocean boundaries on two sides. What followed was a three hour trip traversing riverbeds, broad rolling pastures, through stands of native bush, steep gullies, and really scary inclines… there are always scary inclines…all accompanied by Jo’s fascinating commentary.

One of the great views of the station property.

Spectacular view on the peninsula!

Looking out at the Devil’s Tooth.

The Gannet colony on the peninsula.

Jo, herself, was intriguing. There was something I intuited about this woman’s intense affect and look in her eyes when she was describing this rugged coastal property that suggested this was more than just a job: she knew and loved the land. I ended up being right when I found out from the other single woman on board that Jo had confided to her during our tea/coffee break that her brother had been the previous owner. After a year of negotiations, he sold the place to a New York billionaire named Julius Robertson, with the provision that the family continue to have access over the land to continue their  Gannet Safaris business.

The new owner has built an eighteen hole golf course ranked 16th in the world. I think it was sarcasm when Jo mentioned that she’d heard there was a greenskeeper for each hole! The course is open to the public with a greens fee that runs $400. (NZ); Kiwis can play for $200. The views are absolutely spectacular. The new owner also funds a bird sanctuary on the property and erected an elaborate fence created to keep predators out. Feral cats have joined the list that also includes rats, possum, and stoats( part of the weasel/ferret family) that have contributed to the decline of many native birds including the kiwi.

The putting green next to the club house. 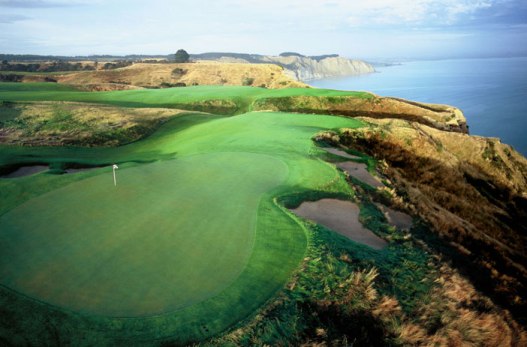 Ariel view of one of the holes (Google photo).

Later, back in town, it was walking, walking, and more walking just soaking up the sunshine and beautiful landscapes.  I recently read this quote from a blog that aptly sums up how I am feeling these days: