Bryon Bay and Country Life in the Hinterlands–Part 1

The beach at Byron Bay. Clean and still undeveloped!

If you measure distance in time, you must be either in the state of Maine or the huge country of Australia.

For some reason, I was thinking that Byron Bay was only a couple of hours north of Sydney… wrong!  It’s about ten hours by car and twelve to thirteen hours by bus or train.  Flying is the best option, but for some reason I found myself, a lone senior, on a Greyhound stuffed to the gills with fresh-faced millennials leaving Sydney at 7:00pm and arriving in Byron Bay at 8:00am the following morning.  Trying to be an optimist, I figured I wouldn’t have to find accommodations for the night.  I could sleep on the bus.  In a stiff, narrow, barely reclining seat….pillowless.  End result…snoozeless! (Yes, I made up these words)

Arriving thirteen hours later, I  wanted to kiss the ground as I stepped off the bus weary and bleary-eyed. But this is a comfortable and soft place to fall.

Byron Bay has a “turn on, tune in, drop out” hippie past, but it still has that “be cool”, laid back vibe, and keeping with the tenor of the times, it is also infused with a healthy dose of New Age. Downing two cups of coffee in quick succession at the Byron Cafe, my eyes scanned a heavily papered wall of posters advertising an array of festivals (Moonlight Mystic, Starlight, Spirit, Writers, Blues) and every imaginable service or class for the mind, body, and soul.

View of the beach right off the business district. 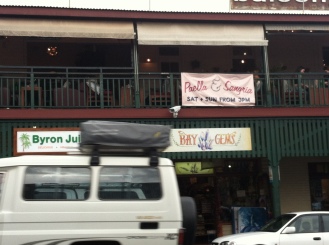 Getting a little bit of sun and jotting things down.

Life style is important to Australians, and this region with its beautiful beaches, warm weather, lush country side, and long growing season is drawing more and more people from the big cities who want to either buy vacation homes or move here permanently.  A  fun and relaxing place to be on my own, I booked an airbnb private room within walking distance to town and the beach for three days until my new hosts were ready for me.

I was planning to be just twenty minutes north of Byron Bay in the hinterlands, known as the Northern Rivers Region, for a month, first house sitting for two weeks and then doing a work exchange for room and board.  Experiencing rural life is another goal of my adventure.

Once again, thanks to the great networking of my friend and travel mentor, Gayl, I was introduced to her young friend Katrina, originally from this region and now a busy lawyer who splits her time between working in Melbourne and coming here on the weekends (did I mention life style?).  Katrina put me in touch with childhood friends who have also moved back to the area from Melbourne, and they offered me a house sitting position while they’d be away on vacation.

This really is God’s country. Still very rural, the rolling hills and lush green landscape is dotted with farms and open pastures. Practically anything can be grown here due to the subtropical climate and rich volcanic soil. Although beef is still a major producer, fresh, local, organic food sourced from local artisan producers have joined the ranks with crops like avocados, macadamia nuts, bamboo, and coffee.  Farmers’ Markets laden with fabulous produce can be found almost any day of the week.

My host family lives in a little village called The Pocket, so named because it is surrounded by foothills. The closest town is Billinudgel a short drive away and home to the historic Billinudgel Hotel, which has been open since 1908. Some other towns close by and part of this region are Mullumbimby (Mullum), New Brighton (Newie), and Brunswick Heads (Bruni). Australians love to shorten words. 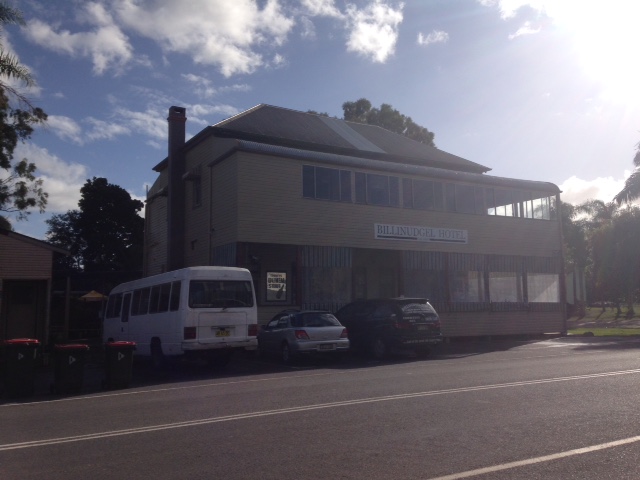 The historic Billinudgel Hotel, which has operated since 1908.

The other side of “downtown” Billinudgel.

The Yum Yum cafe in New Brighton. Right around the corner is a beautiful beach and across the street every Tuesday is a terrific farmer’s market.

One of the many outdoor markets in the region. This one in Mullumbimby on a Saturday morning.

Lani and Paul’s lovely home is a restored school house with soaring cathedral ceilings and an open floor plan.  The property also boasts a swimming pool, two small cottages, and three acres of land. Lani, the consummate gardener, has created a landscape of exotic flowers, fruits, and vegetables. My duties for the next two weeks were to water the gardens and plants, vacuum the ever-present cob webs, and haul away the palm fronds (they collect water and breed insects) to the burn pile (everyone here has a burn pile). I was scared out of my wits a few times hearing the sudden BANG of a large palm frond hitting the roof.

Paul and Lani’s house in the Middle Pocket north of Byron Bay. 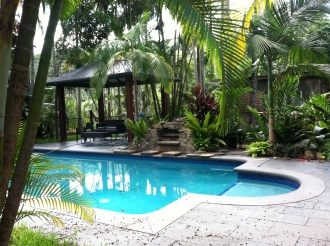 The pool on the property!

Exotic flowers in one of Lani’s gardens.

Since this is the country where all things poisonous dwell, she also educated me about red back spiders, a host of snakes, and even pythons. Lani related a story –this is firsthand not hearsay–about a young mother who suddenly awakened in the night, went to check on her new infant, only to find a huge python coiled around the crib!

I later found out that there was a python living on Lani and Paul’s property. I never saw it, but on a return visit after their vacation, they told me they found the skin it had shed on the front porch hammock.

I did have a minor spider encounter. One morning I woke up to find a HUGE spider (Huntsman?) on the wall just above the bathroom door.  Too freaked out to kill it AND not knowing how to take it alive, I left it there for two and a half hours, skulking back every few minutes to check to see if it had moved.  Finally, realizing I couldn’t leave it there only to find it later (or not) in some other part of the house, I took out the vacuum cleaner and …

This is just life in the hinterland (rats too!), and I did become acclimated to my new surroundings and found lots of time to paint and write.  But I would still find myself at dusk (when snakes are apt to appear) skittering from building to building like some terrified bug avoiding its prey, trying to make it to safety. (I’m kidding…bit just a little.)

I did find time to paint! My still life painting inspired by Lani’s purple ginger flowers, lemons, passion fruit, and yellow flowers I don’t know the name of! 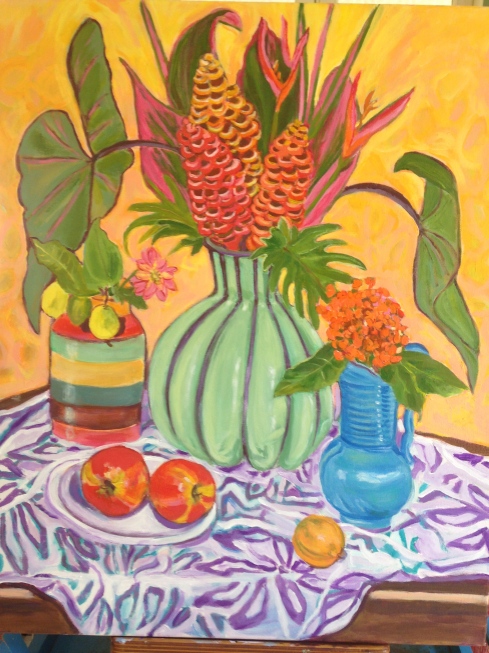 Another still life painting I completed while at Paul and Lani’s home in The Pocket.

I might have felt a little isolated but for the incredible hospitality of friendly Australians.  Katrina, home for the weekend, took me to lunch and a drive around the area. This resulted in another invitation from Katrina and her parents to a family dinner on Good Friday of Easter Weekend. My special treat was the traditional dessert, Pavlova, consisting of meringue, fresh fruit, and whipped cream.   And yet again, an outing with Katrina’s dad to the Tweed Regional Gallery, and Margaret Olley Art Center, lunch, and a drive to the lovely town of Bangalow, known for some of the region’s best street architecture.

One of several panoramic views looking outside the Tweed Regional Gallery. 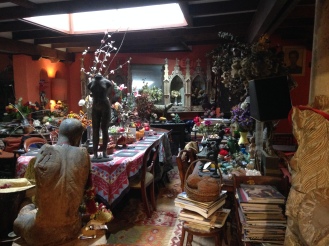 The Tweed River Gallery, featuring the Margaret Olley Center where an exhibition of her home in Sydney has been recreated room by room. Organized chaos!

Paul’s mother, Jeanette and a friend stopped by for the night to attend the Blues Festival. (The Byron Bay Blues Festival this year featured 82 bands, a total of 633 artists and their touring crews, and recorded over 100,000 attendees over the Easter weekend. Brother Jake’s band, Kaleo also headlined.) Jeanette raised four boys, and at the age of 55 decided to become a nomad of the sea. For the past fifteen years, she has been living on her boat “Ariel,” a Down Easter, 38 foot sloop and migrating up and down the Queensland coast. Simply amazing. Simply the best.

Pretty idyllic all around, but as we all know too well, “Into each life some rain must fall.”  Literally, this is the rain forest. It rains.  Metaphorically, this is life.  Shit happens.  The day after Paul and Lani left for vacation, I drove Paul’s car to a busy gas station and … backed into the car behind me.  Not just any dumpy, beater car, it had to some bloke’s just restored 1971 Camaro.  He was not happy.  I felt really stupid, but I had to learn (once more) to forgive myself. We all do stupid things. It’s part of the human condition.

Several hundreds of dollars and a bartered painting later(I decided to be gracious about it), I tried to figure out what I was supposed to learn from this.  The best I can figure is this: first, if you are offered the use of a car, be sure to check that your name has been added to the insurance policy; second, I realized that I can be rather cheap with myself in an effort to save money, but I control nothing! Life deals you a hand and you have to play it, or in this case pay it.

Needless to say I was a little skittish about driving again (but I did…staying left).

Part 2: Finding a Sanctuary at Sanctuary in the Pocket–stay tuned 🙂