Byron Bay and the Hinterland, Part 2:  Finding a Sanctuary at Sanctuary in The Pocket (WWoofing?!)

Entering The Sanctuary in the Pocket retreat.

What a surprise to find out that my next exploit in the Byron Bay Hinterland was also in The Pocket, literally just up the road from my housesitting hosts, and since Lani knew the address, she offered to drive me there.  As we pulled off the dirt road and entered through the gates of the Sanctuary, we both let out a slight gasp. A little disoriented, I could have sworn we had been magically transported to some tranquil, exotic, Balinese retreat. My blood pressure must have immediately dropped because my physical body registered: peace.

If I had any quandaries about my new situation and who I’d be working for, they were quickly dispelled when I met Susie, one of the owners. Susie is dazzling with bright blue eyes that smile and an infectious, ready laugh that is instantly both welcoming and endearing. Her husband Jonathan was away in Sydney where he works four days a week, and I wouldn’t meet him until later.

My quarters would be the cabin, a charming, little house with all the modern conveniences (including a big screen TV with Net Flicks) that they often rent. My initial impression was akin to being eleven again and taking in with delight new and unfamiliar surroundings and imagining all the exciting  adventures in store–even more pythons, spiders, and snakes. 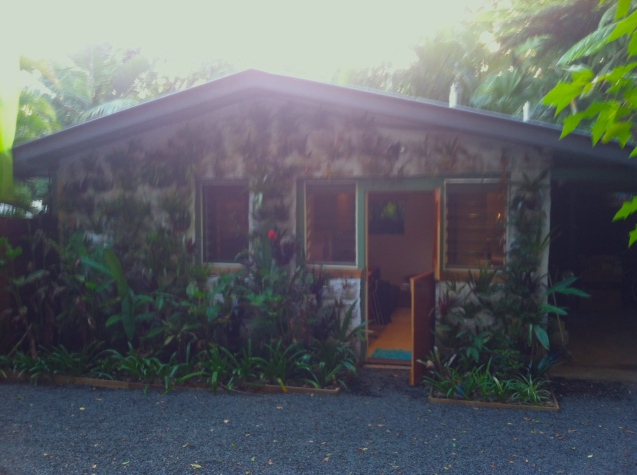 Dubbed “The cabin,” my residence when not rented!

Beautiful, carved Balinses door leading out to a section of the gardens.

Another walk way in the gardens showing the results of my weeding handiwork.

A walk way in the gardens that shows the fruits of my weeding labor!

“The Cottage” where I often stayed when “The Cabin” was rented.

This stay at the Sanctuary came about, once again, through the great networking of my friend Gayl. Several years ago, Gayl spent three months living in NYC, and while there she became involved with an organization called Australian Women Living in NY. Gayl put me in touch with BJ, who is married to an American and currently lives in Brooklyn.  While in Brooklyn celebrating a family birthday in November, I met BJ, and she recommended a work exchange stay with her friends Jonathan and Susie. She made the introduction through email and sent them a copy of my profile.

Jonathan and Susie are transplants from Sydney where they ran a much smaller retreat. Wanting to locate closer to relatives, they spent ten years looking to find the perfect property. It took a year of renovating the three rental units and their home, in addition to creating the desired gardens. During this time they hired wwoofers , who often stayed for up to three months, for landscape work and small building projects.

WWoofing (Willing Workers on Organic Farms) is a loose network of national organizations that facilitate placement of volunteers, who work four to six hours a day on a host’s farm in exchange for meals and accommodation. Hosts do the hiring, and wwoofers often stay anywhere from a few days to three or more months. People (typically young) from all over the world who want to experience a place and maybe learn a new skill and save money, leave the tourist trail behind and live with the locals.

Jonathan and Susie emailed to say that as long as I brought a positive attitude,  I could wwoof as long as I wanted, so prior to my arriving, I agreed to a two week stay.  But after only two days with Susie’s great company (Jon was in Sydney) and generous, delicious cooking, I quickly asked to stay for three weeks!

Jonathan and Susie, owners, hosts, and new friends at The Sanctuary in the Pocket

The Hinterlands landscape surrounding Sanctuary in the Pocket.

A shot of “The Retreat,” a two bedroom one bath, beautifully appointed cottage looking on to the private pool. 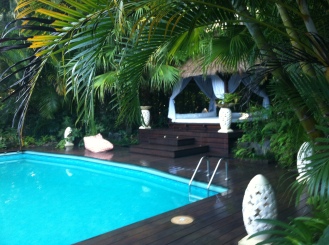 Another view of the gardens. I got to mow the five acres on Jonathan’s big riding lawnmower.

My work schedule consisted of six hour days Monday through Friday with the remainder of the day free and weekends off. Work days started with breakfast with Susie around 7:30, work commenced at 8:00, followed by a mid morning break, a lunch break, and finishing  at 3:00. Most of my time was spent working on the five acres of botanical gardens weeding, pruning, transplanting, and hauling palm fronds to the burn pile. To break things up, I also did interior painting, pool cleaning, mowing with Jonathan’s big riding lawn mower :), and helping Susie with cleaning the guest cottages. (And to think I was paying big bucks back home lifting weights and doing squats with a trainer.)

I worked hard, but they both work a lot harder! Susie’s days never end. After hours of cleaning, doing laundry, preparing me a nice lunch, doing more laundry, she’d have a home cooked dinner ready for us at seven. This was when we could relax and talk about the world and life in general.  I think she enjoyed having me, a contemporary, for company.

Jonathan and Susie have hosted may young wwoofers from around the world, most of them of great people, but life would not be complete with out a few intermittent bouts of drama, most often the broken heart kind. One Canadian young woman called Susie and Jonathan in the middle of the night in tears because she was not only heart sick missing her new German boyfriend who had returned home, but also because she was living in squalid conditions at a new host farm. They promptly went up north to pick her up.

They are both still in touch with several young people who worked for them, and while I was there, Susie played matchmaker and fixed up a Brazilian woman now living in Sydney with a guest also from Brazil who was relocating there.  Many a Friday night wwoofers would find themselves treated to pizza and music in town with Susie and Jon.  Anyone would be extremely lucky to find themselves wwoofing at Sanctuary in the Pocket. And then there is the beauty of the place and the peace and quiet.

Each morning donned with rubber boots, gardening gloves, and hat, I grabbed my wheelbarrow and entered a sub tropical world of exotic plants and manicured gardens surrounded in the distance by lush pastures and the rolling hills of the hinterland. But most of all, I relished the silence--intruded on only by the lilting trills and warbles of the Australian butcherbird, the occasional raucous, staccato laugh of the kookaburra, and depending on where the neighboring farmer was grazing his herd, the occasional, lowly baritone moo of a cow.

There is something so satisfying about doing physical work, particularly working the land.  I’m the kind of person who tends to be in my head a majority of the time.  Having worked as a high school English teacher for many years, papers to correct and constant planning always came home with me.  I savored summer vacation and the meditative time working in my gardens. I am reminded of Antaeus, the giant wrestler in Greek mythology, who tapped his power from the earth and was invincible as long as he kept his feet firmly planted on the ground. Heracles defeated him by locking him in a bear hug and lifting both feet off the ground, crushing him. Feeling a little crushed and dinged up myself after months of traveling and city life, I felt restored (and slept like a rock at night).  Jonathan (as genial as his wife), an accomplished gardener, with a keen eye for landscape design, was happy with my work and glad that I knew what I was doing.

Two weeks into my stay, I was joined by Victor and Cleaya, a young French couple from Lyon.  On vacation for three months in Australia, they came to wwoof for four days having worked on a bamboo farm nearby the previous four days. A little older and more mature, they were both looking to make career changes, and since the job market is tough in France right now, are even considering making a move to Australia. Like- minded travelers, they wanted to experience all aspects of life in a different part of the world.

Looking back, it is beautiful how we all touched each other in some way having come together from different countries, backgrounds, and age groups, living and working in tandem for a few short days and doing simple, physical but satisfying work bringing us closer to nature  without modern distractions.  I am forever thankful to Susie and Jonathan and many of their friends who welcomed me and shared little slices of their lives.

Susie and I saying goodbye to Victor and Cleaya. 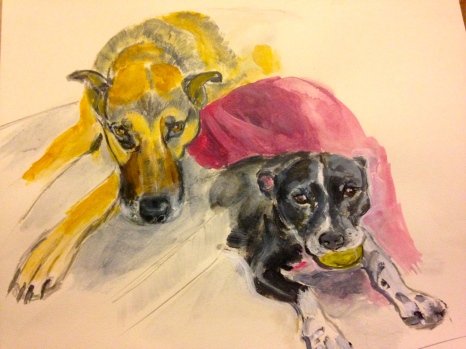 My water color of Jack and Bella, Susie and Jon’s faithful companions, and a gift to Susie and Jon. (I think they help keep the snakes away!)

Victor and Cleaya, two “Woofers” from Leon, France, who joined us for four days.

As life in The Pocket was quickly coming to an end, it was time to figure out where I was off to next.  At this point, I only knew my next stop was south to Melbourne, and I had already booked a flight from Darwin in the Northern Territories to Kununurra in  Western Australia on May 31st where I would be spending the month of June. But what was I going to do with the five weeks in between?  This kind of thing really throws me as I can become overwhelmed easily when faced with making concrete plans, arranging plane reservations, and figuring out accommodations. And doing all this online, navigating web sites, juggling credit cards and bank accounts–and keeping it all straight. But this is about growth, right?! And panic is a natural part of the process of growth.

I had to move forward. I couldn’t stay stuck.  So I went back and re-read  Steven Pressfield’s powerful little book, Do the Work, and called on stubbornnes and blind faith, a couple of champions on my side, and “slayed that dragon resistance.”  The end result….pretty amazing…. the adventure continues.