Uluru and the Red Center: The Spiritual Heart of the Country. 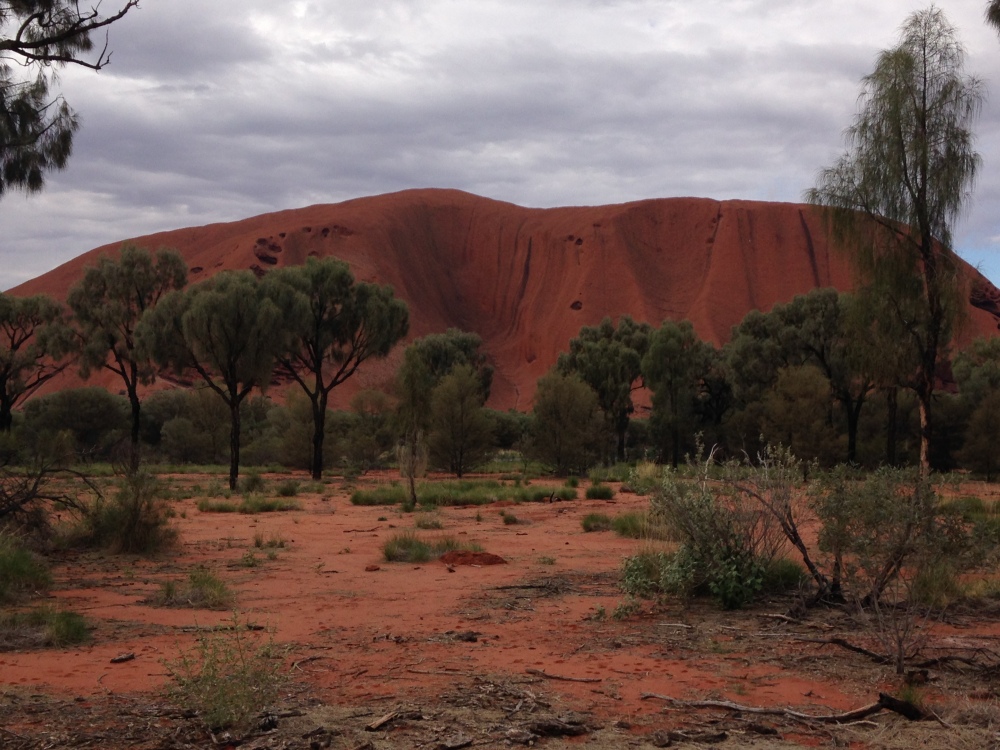 Driving up to Uluru. It really does take your breath away.

“It’s not that Uluru is bigger than you had supposed or more perfectly formed or in any way different from the impression you had created in your mind, but the very opposite.  It is exactly what you expected it to be.  You know this rock.  You know it in a way that has nothing to do with calendars and the covers of  souvenir books.  Your knowledge of this rock is grounded in something much more elemental.”

Bill Bryson, In a Sunburned Country

After reading Bryson’s travel book, I knew I couldn’t come to Australia and not see Uluru (formerly Ayers Rock).  In addition, British artist Bruce Munro’s Field of Light solar- powered art installation had just opened in April. How lucky to have this added bonus!

Uluru-Kata Tjuta National Park is located in the Northern Territory, smack dab in the middle of the country and about four and a half hours from Alice Springs, the nearest major town.  I flew directly from Melbourne to Ayers Rock Airport and was happy to learn that the Ayers Rock resort,  which has sprung up to provide visitor accommodations and other essential services, also runs free buses from the airport to the resort

I had read that accommodations at the resort were expensive–and they are.  Be prepared to spend anywhere from $220 to $475 a night for a hotel …unless you are willing to stay at a campground or share a hostel dorm.

After doing some research, I found that the Outback Pioneer Lodge and Hotel (cheapest hotel with rooms running $220 to $300) also doubles as a YHA hostel with a section of dorm units.  These tiny rooms house up to four people and consist of two bunk beds, and that’s about all, but close by is a kitchen, large shower/bathroom/laundry facility, and lounge room.   The price: $34.00 a night.  AND the best view of Uluru in the whole resort can be seen from the viewing station out back behind the dorm section! 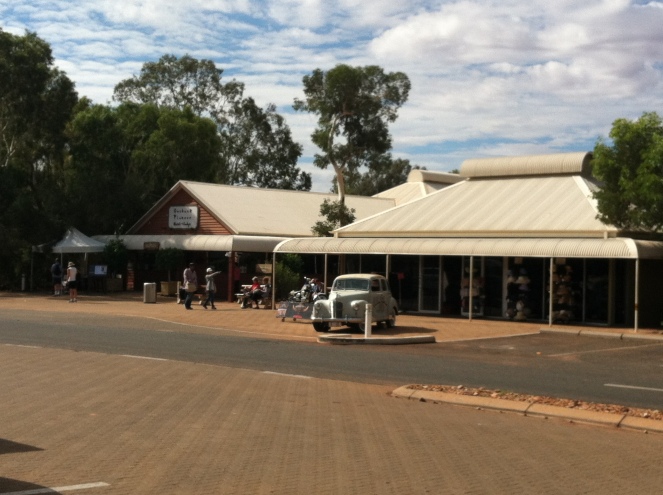 The Outback Pioneer Lodge and Hotel. They also have hostel dorms where I stayed for a lot cheaper! 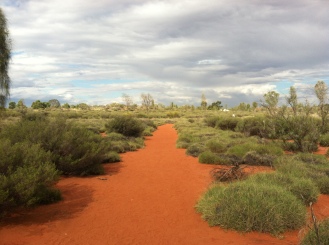 Walking to the center from the Outback Pioneer Lodge and Hotel. Yes, this is the color of the ground! 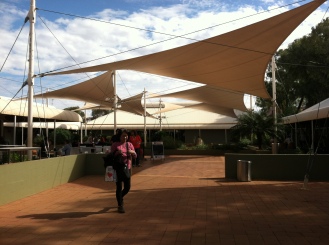 View of the Town Square, just a 15 minutes walk from The Outback Pioneer Lodge or campground. Buses also run every 10 minutes from other hotels to the square and back. 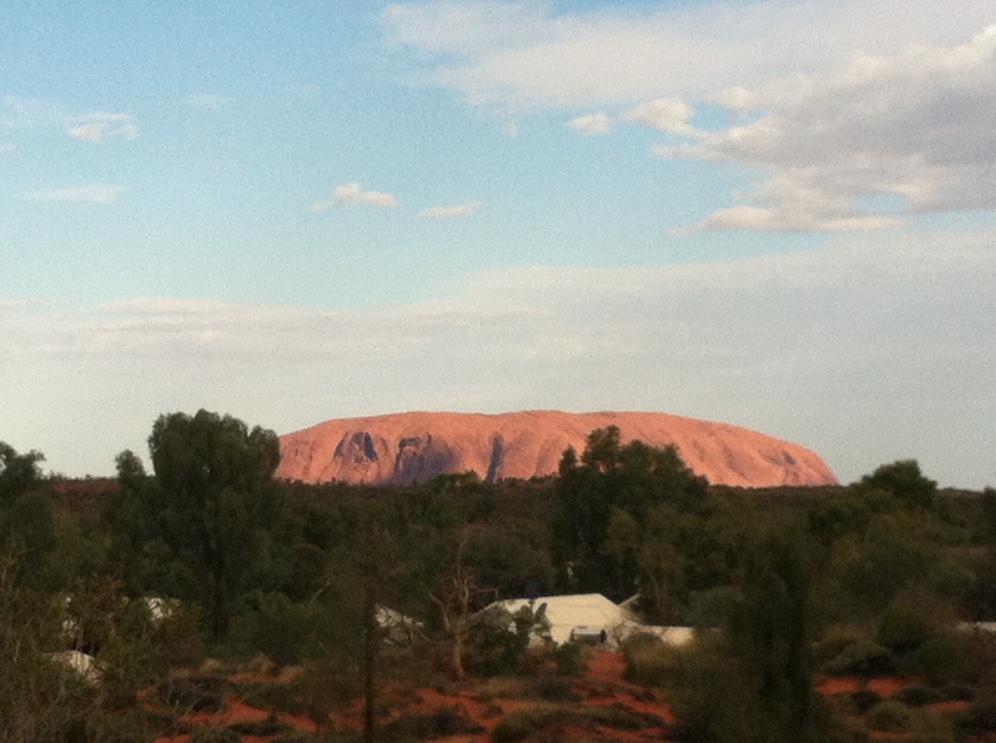 The best views of Uluru are at the Outback Pioneer Lodge’s viewing station just behind the hostel dorms!

Initially when I found the dorm rooms online, it appeared that only mixed dorm units were available.  I was put off at first about a “mixed dorm” and hemmed and hawed a little before deciding, What the hell. It was only for three nights. But when I arrived and checked in, I realized that my only other roommates were two women.  I have a feeling they advertise mixed dorms on purpose to discourage people from from taking the cheaper rate, and the hotel sells the more expensive rooms.

At first I thought I would splurge and treat myself to a private hotel room. But then I remembered my goal of meeting people, and what a wise decision.  Returning to the dorm later, I was greeted by two lovely young women, Mika from Japan and Rena from Indonesia.  After chatting and exchanging introductions, Rena turned to me and said, “I am so glad you’re here.”  I was somewhat taken aback, and she must have read my expression because she went on to explain that what she loved about traveling was meeting people. What a beautiful thing to say to a complete (and older) stranger who would be taking up one quarter of a very tiny room.  All in all, we ended up spending about eight hours of sleeping time together as most tours left before sunrise or ended after dark in the evening. 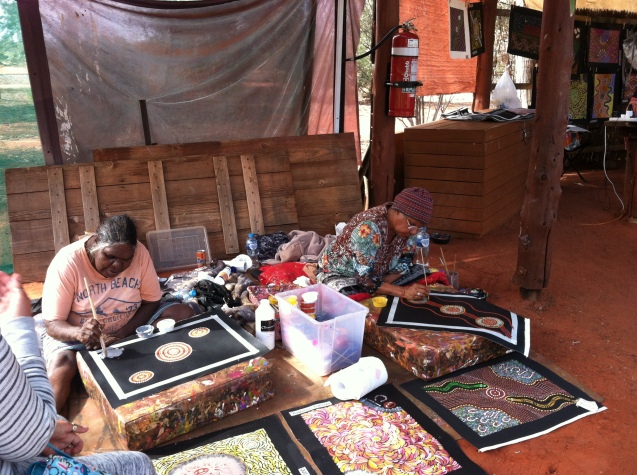 Aboriginal artists demonstrating their painting techniques near the The Town Square. 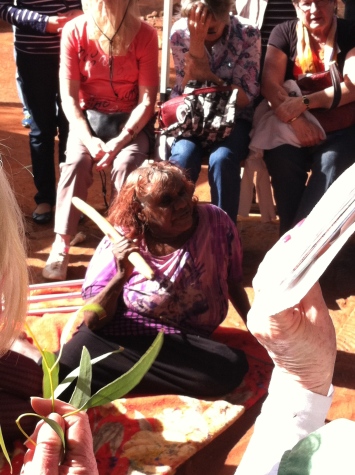 Some story telling and ceremony objects at the Town Square.

I had booked ahead a sunrise tour of the Field of Lights art installation with AAT Kings and  was picked up at 5:30 am the next morning.  Excited about seeing this, I had done a little reading  ahead of time to pick up a few facts. Munro created 50,000 hand made globes on flexible light stems that allow the lights to sway in the wind like wild flowers. The palette of colors changes from the deepest purple, to red ocher, to a soft white and cover an area the size of four football fields with Uluru majestically in the background. It took forty people and many volunteers six weeks to plant the stems of light and install 144 light projectors and miles and miles of fiber optic cable.

I paid $89.00 for this tour which consisted of a short bus ride to the location and a few nibbles of cookies with tea or instant coffee.  Expecting some great commentary, imagine my dismay when the tour guide got on the PA and said  well most of you have probably already read about the Field of Light, but here’s a little background information.  What?! That’s it?!  Nothing about what inspired the artist?  Not even a few anecdotes about the installation?  Surely people have tried stealing the lights!(there’s 24 hour security)  A few of us asked questions, but I felt cheated somehow.

Fortunately, I quickly quit my grumbling when we arrived in total darkness to a jeweled landscape of glowing color that stretched as far as the eye can see.  Even better, we were allowed to walk down into the installation and see it up close.  The globes are about the size of tennis balls on flexible stems that sway above a tangle of  illuminated cable. You have to wonder how the hell did they install this? 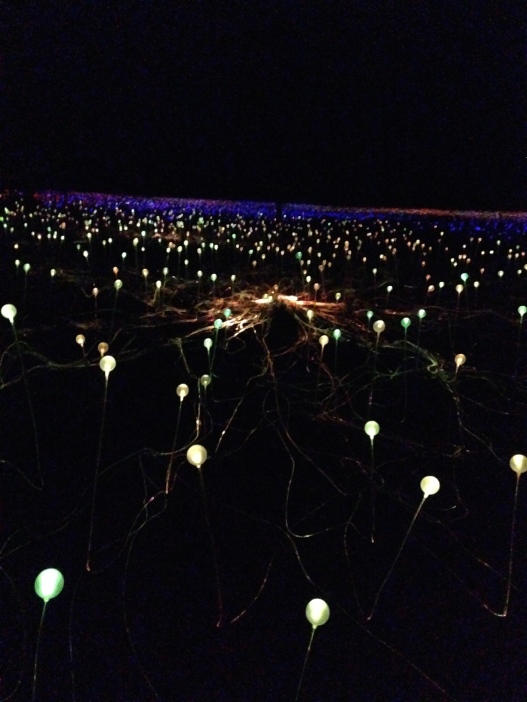 At the Field of Lights sunrise tour, Bruce Monroe’s light installation of 50,000 radiant hand made frosted globes at Uluru. The lights slowly change color under a tangle of lighted cable. 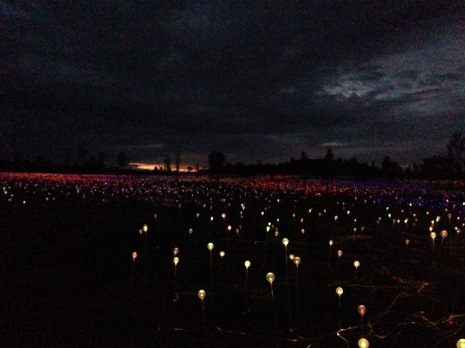 Dawn approaching at the Field of Light installation. Munro visited Uluru in 1992 and was inspired to become an artist. That same visit inspired this installation. 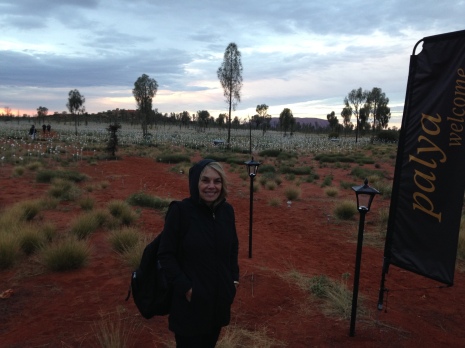 Dawn at the Field of Lights installation. As the sun comes up, the lights turn white and slowly melt into the red earth.

In total silence, we were left to wander and wonder.  This is what it must be like to walk among the stars.  Slowly the night sky began to lighten, and as dawn seeped through, Uluru loomed in the distance–the face that launched 50,000 lights and enraptured an artist for 24 years.  As light filled the sky, the spheres slowly faded in color to a soft white then gently melted into the red earth. This once in a life time experience ended up being the perfect first act to introduce the main attraction.  The next day I would get up close to Uluru. 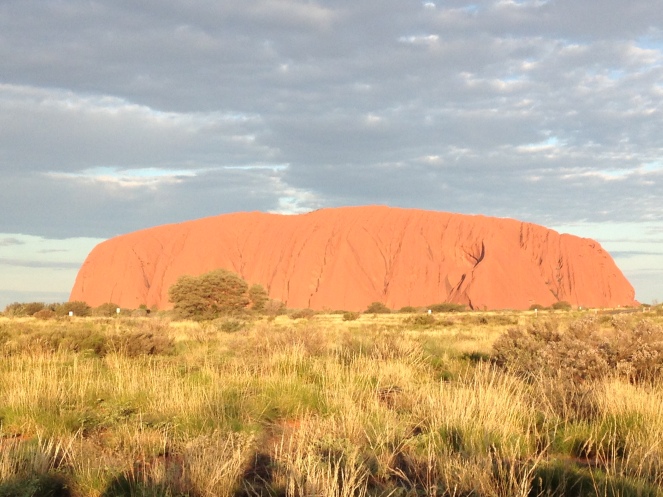 The changing colors of Uluru as the sun goes down from the sunset viewing area. 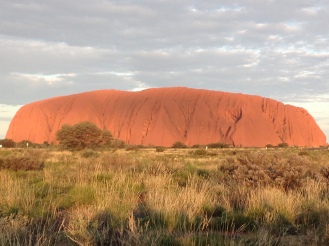 Sunset and the striking color changes of Uluru. 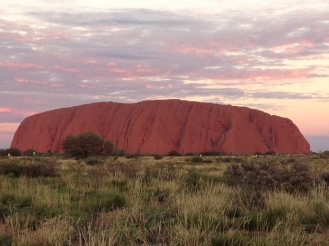 The sun has set!

As I did with the Field of Light tour, I also booked ahead my Uluru sunset tour for the following day.  For $119.oo plus $ 25.oo for the Park ticket, my trip included the base tour and Kuniya Walk, a visit to the Kata Tjuta Cultural Center, and then late in the afternoon a stop at the Uluru sunset viewing station to watch the sun go down.  For an additional $136.00 I could enjoy the sunset barbecue (kangaroo fillets included) under the night sky with star gazing too.  I initially balked at the price but  later changed my mind and figured when in Rome…  The bus picked us up at 2:35 pm, and we were on our way.

The atmosphere on the bus was infused with a kind of electricity of anticipation the closer we got.  I actually felt a little twinge in my chest. Was this anxiety?  And then we were up close and personal.  Uluru is spell binding and totally arresting.  Those weren’t chest pains; I could feel it in my heart. Arriving at the base you are not only hypnotized by its sheer size but also overwhelmed with the feeling that this is a living, breathing, brooding entity, millions of years old. It really feels alive, and you can’t stop looking at it.  Up close, the surface of the rock has what looks like a red, flaky skin. If extraterrestrials have ever visited earth, they had to have been drawn here. 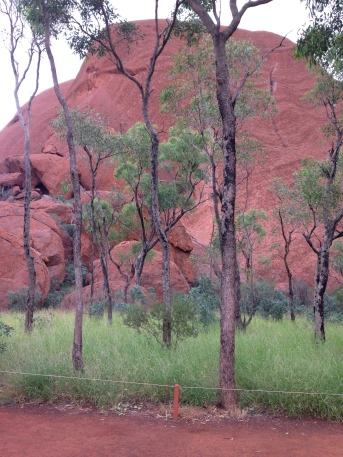 Another view of Uluru from the Kuniya Walk. 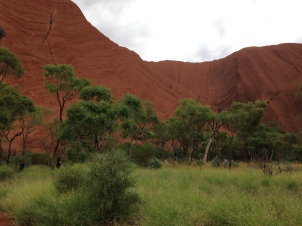 A walk around the base of Uluru is about 5.8 miles. It is higher than the Eiffel Tower or the Chrysler Building. 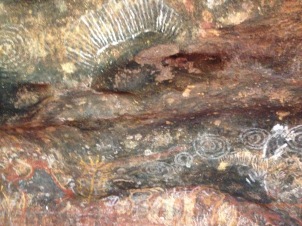 A section of Aboriginal rock paintings on the Kuniya Walk at Uluru. 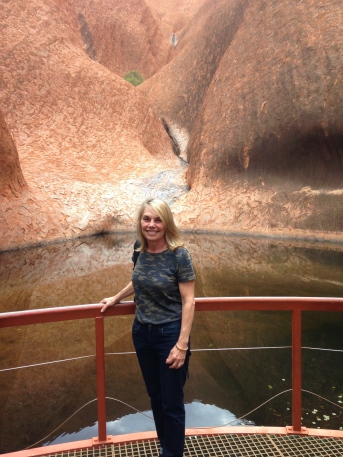 At the base of Uluru, on the Kuniya Walk. The beautiful Mutitjulu Waterhole.

This tour provided some good commentary, but I preferred to wander off a little on my own.  After our base visit, we continued on to the Kata Tjula Cultural Center and then to the viewing station, joined by other tour groups, to watch the sunset color Uluru in array of subtle shades.  With some snacks and assorted drinks, the mood was festive, and  I met some Australian tourists who introduced me to legend Slim Dusty and another country singer John Williamson and his famous song “Raining on the Rock.” 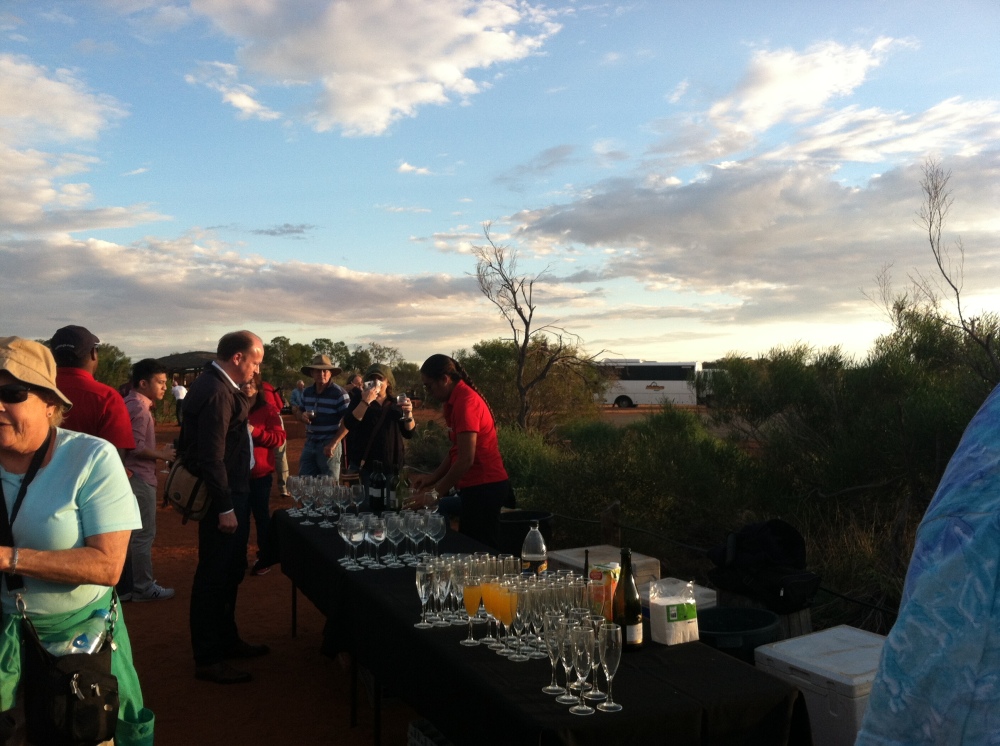 Enjoying nibbles and drinks at the sunset viewing station at Uluru.

When it was time for the barbecue, we were told that it looked like rain and that dinner was being moved indoors at the Cultural Center –a total cop out as it had been partly sunny all day with only a few clouds. I did, nevertheless,  have a lovely dinner sharing a table with a grand mother and grand daughter from the states (a high school graduation gift to go anywhere in the world), and I even tried the Kangaroo, a mild and pleasant dark, red meat.  With wine and champagne flowing, it was a great way to end the day. 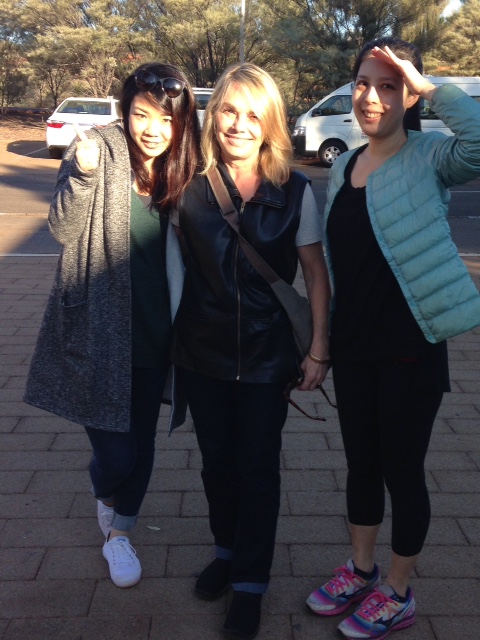 Saying goodbye to my terrific hostel mates Mika from Japan(left) and Rena from Indonesia (right).

Although I wasn’t impressed with the resort and the accommodations offered (they have  a captive audience here), it was worth every penny to see Uluru.  After three quick days, my roommates and I said goodbye early the final morning. But while waiting for the bus to the airport later, we met up again and were excited to have another chance to see each other.  We embraced once more, but when Rena and I hugged, this time we held each other for a few extra seconds…and I felt it in my heart.   Maybe Uluru is the personification of love?