Saying goodbye to Kununurra and the Kimberley Region: The “Last Frontier”of the Australian Outback.

At Middle Springs just outside of Kununurra. During the wet season, there are waterfalls and great swimming here. Stunning photo by Landi Bradshaw.

I’m one of the lucky ones.  Just getting to this remote and wild part of the world is rare for most Australians let alone Americans.  A house-sitting gig for four weeks is in the realm of extraordinary.  Getting to extend my stay another five weeks is unthinkable thanks to the generosity of my young friend Victoria.

This adventure has been one cliff hanger after another as opportunities have miraculously presented themselves, and I’ve stepped into the unknown.  If I had postponed this trip for another year for whatever weak reason(s) (not enough money,not the right time, etc.), my stay here would have looked totally different or not happened at all because since my visit, my hostess has left her five year nursing job in Kununurra and moved to New South Wales to start a new chapter in her life.

I might have missed going on a sunrise photo shoot with Kununurra resident and photographer Landi Bradshaw to Middle Springs, known to most locals but not many tourists.  During the summer months the Springs are flush with waterfalls and deep swimming holes, but a haunting beauty is revealed underneath like the ancient ruins of a lost civilization during the dry season. 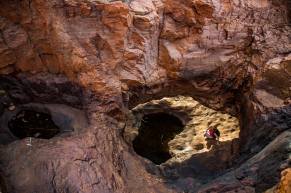 Midland Springs with a view looking down. During the wet season when filled with water, people jump down and swim through this hole to other other side! 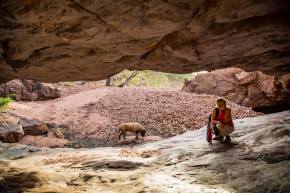 A photo of Landi’s dog and me at Middle Springs. Photo by Landi Bradshaw.

A view on our climb to Middle Springs. 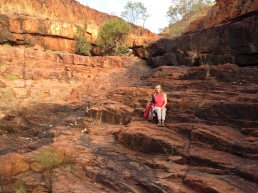 Looking like a stairway (to heaven) this area is awash in waterfalls during the wet season.

My stay in the Kimberley would not have been complete without a sunset cruise on Lake Argyle, a man-made lake and Australia’s largest expanse of fresh water  (Ord River Irrigation Scheme) whose water volume is forty-one times that of Sydney Harbor.  The locals recommended Lake Argyle Cruises, the original tour company on Lake Argyle that specializes in observing wildlife.  The lake boasts 26 species of native fish, rock wallabies inhabit the rocky crevices along the shore, and recent research estimates that  25,000 fresh water crocodiles thrive in its waters.

Along with about forty other people of all ages, we enjoyed commentary from our bearded skipper passionate about his job, along with beer,bubbly, a dip in the tepid waters, and a sunset that didn’t disappoint.  This is a must-do tour for anyone visiting the region! 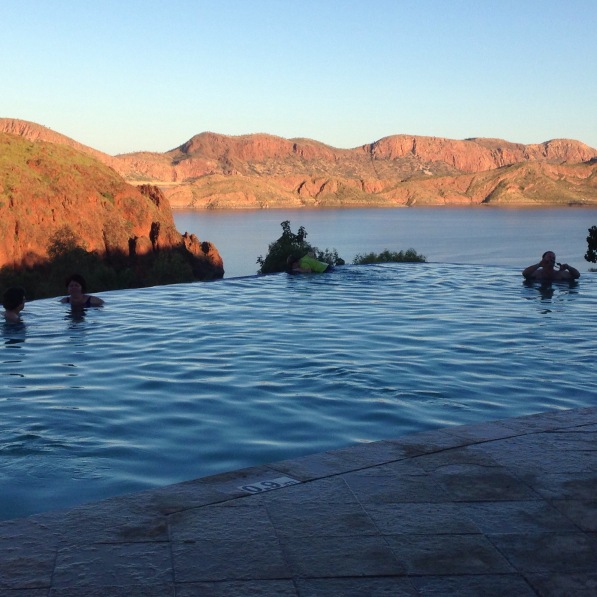 Looking out over Lake Argyle from the infinity pool at the campground.

Rock Wallabies are a common sight at Lake Argyle. 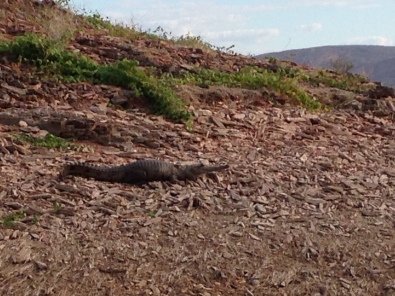 A fresh water crocodile on the shore of Lake Argyle.

Perfect weather and sunset for a swim in Lake Argyle. Clean and warm.

I was really going to miss the early morning ritual of taking my house-sitting charge and new found buddy, Banjo the Australian Kelpie, to the irrigation channel for a run and a swim.

My buddy, Banjo, at the the irrigation canal in Kununurra. Photo my Landi Bradshaw.

My acrylic painting of the irrigation channel.

Plenty of bird watching at the many irrigation channels in Kununurra.

This is a popular spot for bird watching, dog walking, or jogging.  I highly recommend taking early morning walks, or walks at any time of the day, free from distractions like iPods because you might miss something. Which leads me to one more salt water crocodile anecdote.

While I was away at Auvergne Station, I’d read a Facebook post by Victoria on the Kununurra Community Noticeboard about a salt water crocodile siting at the channel where I took Banjo each morning. Victoria knows a “saltie from a “freshie,” yikes!   After returning to Kununurra a week later, I had forgotten about it and went to the channel as always.  But as I was walking along and throwing stones in the water for Banjo to swim after, I kept noticing that the hawk-like birds, normally seen on any given morning, were following and flying awfully close.  At one point I was waving my arms over head feeling like human prey in a Hitchcock movie.  After changing direction, I felt I was still being pursued, so I decided to leave and drove further up the road to a different channel.

When I returned, Victoria  was home after working a late shift, and I relayed my unsettling experience.  She looked at me wide-eyed and stated: “Didn’t you hear?  A friend of mine also saw a salt water croc at exactly the same location yesterday!”  I was initially stunned, but not before I realized that the birds had been warning me!  I honestly believe that.

This incident, along with the many hours I’ve spent outdoors exploring this vast and sacred wilderness have brought me that much closer to understanding the limits we impose on ourselves and our experiences with the world and nature by relying only on the five senses.  What else might we be missing?  There are probably little miracles happening around us all the time, yet we fail to “see”them.

“Winjinas” cave paintings in the northwestern region of the Kimberley. Winjinas were “sky beings” or “spirits from the clouds ” who came down from the Milky Way during Dreamtime and created earth and all its inhabitants. They look a little like aliens. 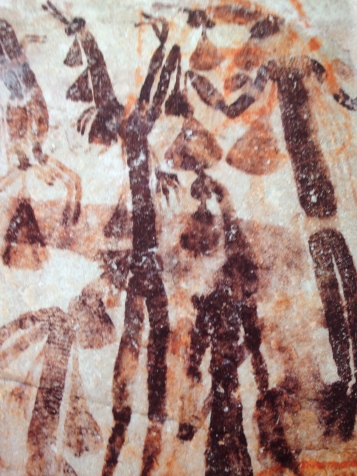 Called Gwion Gwion or Bradshaw paintings, found also in northwester Australia. They are considered to be the oldest figurative paintings in the world.

Traveling has helped me grow my awareness in a big way, but there are lots of little ways of raising awareness.  Breaking mundane habits is a start.  I like this quote by author and mountaineer, Jon Krakauer:

“Joy is in everything and anything we might experience.  We just have to have the courage to turn against our habitual lifestyle and engage in unconventional living.”

I fly to Broome, a beach resort town on the Indian Ocean in the western Kimberly region , in a couple of days.  But this time there won’t be anyone to greet me.  I’m on my own for a couple of weeks.  This brings to mind another quote to help bolster my sometimes flagging, adventurous spirit:

“The universe will open doors where there were only walls.”