A view of Cable Beach, almost perfectly flat,  looking out to Gantheaume Point where dinosaur tracks are revealed in the beach’s rocks during low tide.

It was hard leaving the now familiar Kununurra, where I was able to stay for almost ten weeks, to the unknown of Broome where I didn’t really have a contact.  Since this was August and still the high season, accommodations, even airbnb, were expensive, so I booked a shared room for six at the Kimberley Klub hostel, an easy walk to town that also featured free rides to nearby Cable Beach twice a day.

This was my second hostel stay in Australia, and I should have known what I was in for when I read a review on Trip Advisor: “Crowded rooms, dirty common areas, endless loud music, and pay-extra-for-everything amenities, or should I say basics.” I found this beach resort town over-rated and expensive.  But maybe my impressions were colored by the fact that after eight months on the road solo, I had “hit the wall,” the travel wall, that is.

Thoughts of the future were also slowly cutting into the present, and I was finding it hard to resist the urge to pick at the scabs of worry about what I would do after this trip.  My plans are nebulous.  Before I had even entertained the idea of traveling to New Zealand and Australia, I had decided to quit my teaching job and take my retirement. I was going totally on intuition and what “felt right” and ignoring the aftermath of that decision which placed me with an uncertain financial future.  I could envision Suze Orman shaking her finger at me and saying you’ll be sorry.

Let me be perfectly clear: This is the best thing I’ve ever done!  But as I near the end of my trip, I’ve had to keep up a tough volley between the comforts of security versus risk-taking. The exercise of this adventure has helped me develop some muscle of the mind, strengthening my resolve to be comfortable with the unknown.

The Kimberley Klub did live up to its sour reviews, but there were, surprisingly, several other “mature”guests staying there like  what appeared to be a group of “church ladies” on a little holiday, a woman constantly on her cell phone, supposedly a journalist, several permanent residents that included a very sweet 80-year-old man with perpetual questions regarding his flip phone, a couple of guys always cozying up to young women for conversation, and Heather, the sweet, next door neighbor I befriended.

Heather was a long term resident who worked at one of the hotels during tourist season.  She was sharing a six bed room along with two young women residents who were not very nice to her (the scene there was a tad depressing).  Thanks to Heather’s recommendation, I moved after five days to Beaches of Broome, a much nicer place that offers dorms as well as private, en suite rooms, and is a short walk to Cable Beach.

Sun Pictures opened up in 1916. Today it is the oldest open-air cinema in the world. 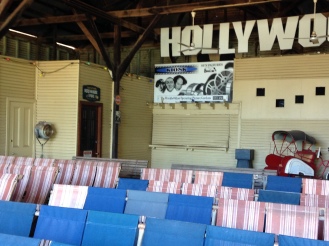 Looking inside Sun Pictures. I got see the New Zealand picture, Hunt for the Wilderpeople. Highly recommended! 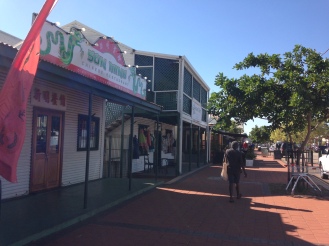 The main street of Chinatown in Broome. Lots of shops and restaurants line the streets including expensive showrooms offering beautiful cultured pearls.

Broome is a small town with a history centered around the pearling industry.  Its multicultural flavor harkens back to the many Japanese, Chinese, Malay, and Aboriginal people who came to work under dangerous and squalid conditions as divers, many of whom lost their lives.  Today, Broome’s pearls are produced on modern sea farms and are still exported all over the world.  Many beautiful showrooms line the streets of downtown Chinatown, but inexpensive pearls can be found at the Courthouse Market on Saturday and Sundays.

Along with beautiful beaches, Town Beach boasts the natural phenomenon, Staircase to the moon. Visible from March to October for a couple of days each month, you can watch an orange, full moon slowly rise from the sea over the exposed tidal flats of Roebuck Bay, its reflection creating golden steps.  I was lucky to be in Broome at the right time and had a front row seat on the veranda of the Mangrove Resort Hotel. With accompanying didgeridoo music, it was hypnotic.

Staircase to the moon as seen from The Mangrove Hotel Resort at Town Beach. A full moon rises up over the exposed tidal flats Roebuck Bay 2 -3 days a month from March to October.

Tourism has exploded in the last few years as Broome has become a gateway to the Kimberley region and most tour packages originate here.  This would account for the high prices, inadequate tourist infrastructure (the visitor center needs to put in a public bathroom!) and the amount of building going on.  But it is still worth the trip with places like Cape Leveque, 149 miles (240km) north at the tip of the Dampier Peninsula, with its red rock and deserted white beaches.

My stay at Beaches of Broome was a short walk to to Cable Beach. These camels came by each night to take visitors on a sunset tour at the beach.

Spectacular sunsets each night at Cable Beach, named after an undersea telegraph cable that was laid in the late 1800s connecting Broome to Singapore.

It wasn’t tough to say goodbye because I was heading all the way south to the beautiful city of Perth to stay with friends Gayl and Tom on the last leg of my journey.  I saved the best for last according to Gayl. Oh, the places you’ll go and the people you’ll meet. Truer words were never spoken.