I’m not Ubering around here.

What I am doing is trying to master NYC mass transit. Like Luke Skywalker, introduced to the ways of the Jedi, I’ve got it in my head this self imposed, home schooled education will earn me my way to the title of Resident New Yorker.

Each trip is a revelation about living here… and a revelation about my 66 year-young- self. I’ve been venturing out of my Brooklyn neighborhood to other locations in Manhattan on a regular basis, sometimes during the comfort of daylight other times under the cover of darkness and long shadows late at night (well, 11:00PM is late for me).

Every ride on the subway is akin to finding yourself suddenly cast in some kind of bizarre Best Short Film.

The NYC subway car is a microcosm of the world young and old, rich and poor, fresh and scrubbed, ripe and unwashed, from far and away, born and raised, unpretentious, ultra glamorous, inconspicuous, and ostentatious, blowzy, mangy, kind, and surly.   Thrown together hurly-burly.

On an 8:00AM rush hour car, I find myself crammed like cattle nose to cheek, desperately seeking not only something solid to grip but also a place to rest my eyes. For some insane reason, people do not, “Stand clear of closing doors,” and move to the center of the car where lucky patrons enjoy ample room.  NOooo.  Everyone prefers to keep their back-packs on and inflict pain on each other squeezing in near the exits. And people put up with it! Occasionally the herd isn’t so docile, and an angry bellow, “MOVE!” causes a seismic shift.

It pays to have both a sense of humor and sense of the ridiculous. I choose viewing this situation through a playful lens. It’s fascinating. Each ride unique.

And then it’s not so amusing. Some poor, afflicted creature displaying an I’m-off-my-meds-I’m-high behavior sends a slight ripple of unease through the air. I witness a young guy in army green, ear phones plugged in, pacing back and forth the entire length of the car, weaving around the poles, arms flailing playing air guitar. We ride four stops this way until other passengers board and fill the space. 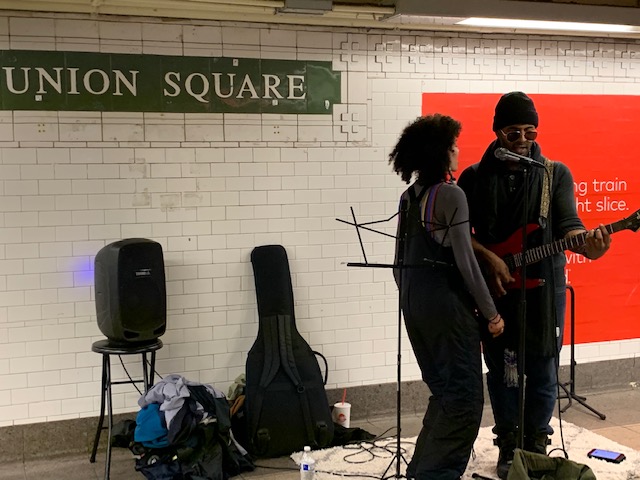 Sometimes you get a double feature. A hopeful singer looking to raise money for recording fees bursts into song with finesse and surprising range. Time stands still, and for a few moments there’s a unified field of good will, dollars collected. Panhandlers of every design, too, share this captive audience. This one, a mountain of a man, bearded with long dark hair, wearing a DIY muumuu from what appears to be a bed sheet. He eventually shuffles along.

But wait….amazingly, chivalry is alive and well. Standing in a crowded train, I feel a slight tug on my coat sleeve. As I look down into the face of an earnest young man, he silently gestures to me to take his seat.  On the one hand, I groan inwardly thinking, do I look that old? But on the other hand, I think, how can I refuse such a courtly gesture? It’s obvious he loves his Momma, and she’d be proud of this outward show of manners. 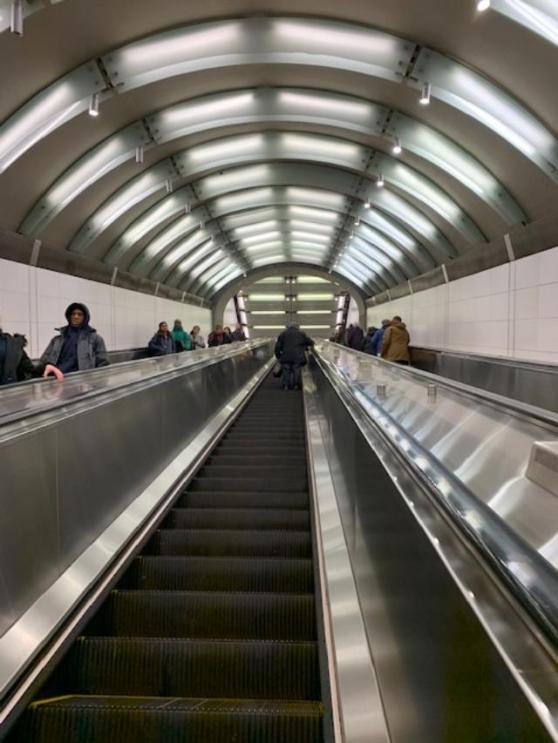 The Q train at East 72nd Street, Manhattan. So this is how the other half lives.

These subway, mini-adventures have made me realize that we sacrifice a lot of living today for the comforts of convenience. Our lives have become so busy and outwardly projected, heads down, eyes to phones, that we no longer really see each other and lose those fleeting, often joyous moments of connection with total strangers reminding us that in the end, we’re all just trying to make it through the night.

Of course, at some point, I’ll dial up an Uber.

In the meantime, I’ll enjoy commiserating and communing on the subway with my “Human Family.”  Maya Angelou expressed it poignantly in her like-named poem:

I note the obvious difference

between each sort and type,

but we are more alike my friends,

than we are  unalike.